What's on the program for your local performing arts organization? The Classics a Day team wants to know! For the month of September, you're invited to post a work that your local symphony, chamber music ensemble, or choral society will be performing this fall. 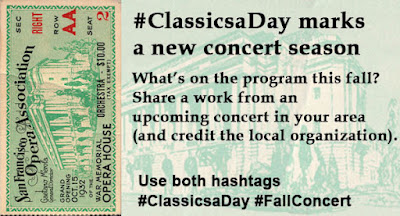 There's a lot of great music-making going on. Let's share it all!

I live in Central Virginia, so my posts showcase concerts in that area. I was pleasantly surprised at the variety and imagination of the programming. (I hope you will be, too.) Here are my posts for the third week of #FallConcert

Khandoshkin was born in Ukraine and is described as the "finest Russian violinist of the 18th Century." He's featured on the opening concert of Three Notch'd Road Baroque Ensemble, on Nov. 4.

The Charlottesville Symphony performs a selection of  Hungarian Dances at their opening concert on September 24.

The Waynesboro Symphony will perform the orchestral suite from this ballet at their October 1 concert. 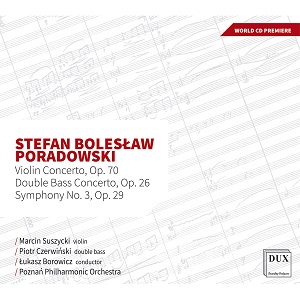 Stefan Poradowski was a man of many talents -- including a talent for survival. This Polish composer was deported by the Nazis in 1939,. He lived through the war and returned to become Vice-Rector of the Polish State Music Academy.

Poradowski was also a renowned violinist and organist. And he was a respected artist and art photographer.

These days, he's best known outside of Poland for his compositions. His Double Bass Concerto, Op. 26 is often performed at double bass competitions.

In the immediate postwar period, Poradowski worked closely with the Poznan Philharmonic Orchestra. So it's fitting that "his" orchestra record these works. The ensemble, directed by Lukasz Borowicz, has a nice, tight sound. The various soloists perform a high degree of musicality.

Poradowski wrote in a mainly tonal style. To my ears, it sounds a little more conservative than, say, Prokofiev. His themes are well-defined. And the structure of his music makes it easy for the listener to follow.

Piotr Czerwinski is an exceptional bassist. At times, Czerwinski's instrument sounded more like a cello than a double bass. Czerwinski maintains a well-rounded singing tone in the upper register. That's not easy to do consistently. This is why this concerto makes a good competition piece.

Violinist Marcin Suszycki also gives a good performance. His playing is sometimes aggressive, and his sound often has an edge to it. His performance is what put me in mind to Prokofiev.

The Third Symphony, written in 1930, is the most tonal and conservative of the three works. Poradowski was a skillful orchestrator. And this symphony has some thrilling moments. Poradowski wrote eight symphonies in all. Based on the strength of this one, I would love to hear the other seven. 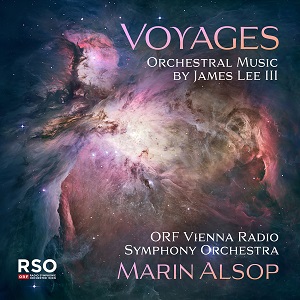 I had not heard James Lee III's music before I received this release. And shame on me. This gifted African-American composer has a rare talent for melody and orchestration. And he has a musical imagination that's well-served by those talents.

Lee writes, “I want to compose music to reach to the inner soul of the listener that elevates them irregardless of race and religious affiliation.”

And he does. Lee's musical language is essentially tonal, though fluid. It sounds contemporary while still being accessible.

Marion Alsop leads the ORF Vienna Radio Symphony Orchestra in some energized performances. The album opens with "Sukkot: Through Orion's Nebula." Sukkot means Feast of Tabernacles in Hebrew. Lee also takes it to mean festivities. Sukkot is the most abstract work on the release, and the most exuberant. It's a perfect concert opener.

A Different Solider's Tale was inspired by Lee's grandfather. He had served in World War II. His experiences as an African-American soldier were very different from his white comrades-in-arms. Lee's music illustrates the action and emotions effectively.

Chuphshah! Harriet's Drive to Canaan ends the program. It's a tone poem inspired by the life of Harriet Tubman. According to Lee, "chuphshah" means freedom from slavery. (I misread it as chutzpah, which means something very different -- but still applies to Tubman, I think.)

Lee quotes from Negro spirituals, Dixie, and the Battle Hymn of the Republic. But these motifs are continuously transformed, aiding the narrative. It's an exciting work, and a contemplative one, too. 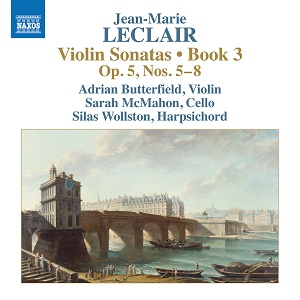 Jean-Marie Leclair published twelve sonatas in his Opus 5 collection. This release presents sonatas 5 through 8 of the set. I reviewed the previous installment in this series, which included sonatas 1-3.

In many ways, this release follows through with the standards set by that release.

Violin Adrian Butterfield shows remarkable musicality and technique with his performances. Leclair was a violin virtuoso. He wrote these works for professional musicians, not amateurs.

All that was true of the previous volume. What makes this one stand out is the music itself. I can't quite explain why, but I think this set of sonatas is better written. They sound a little less fussy than Nos. 1-4. And they seem to have more cleanly-defined melodies.

Both volumes are worth a listen. but if you only have the budget to buy one, I'd recommend this release.

What's on the program for your local performing arts organization? The Classics a Day team wants to know! For the month of September, you're invited to post a work that your local symphony, chamber music ensemble, or choral society will be performing this fall.

There's a lot of great music-making going on. Let's share it all!

I live in Central Virginia, so my posts showcase concerts in that area. I was pleasantly surprised at the variety and imagination of the programming. (I hope you will be, too.) Here are my posts for the second week of #FallConcert

The Albermarle Symphony Orchestra (Charlottesville, VA) will perform this work on Nov. 19. Their season opener is a concert of all female composers.

This is the featured work for the Waynesboro Symphony Orchestra's (Waynesboro, VA) opening concert. Jennifer Kloetzel, founding member of the Cypress String Quartet is the soloist.

This piece will be featured in the first concert of the Charlottesville Symphony. It takes place on September 24.

The Albermarle Symphony will be playing this at their November 19th concert. Unfortunately (IMHO), they'll only be doing "selected movements." Still...

The Waynesboro Symphony will be playing this at their October 1st concert. Jennifer Kloetzel is the soloist.