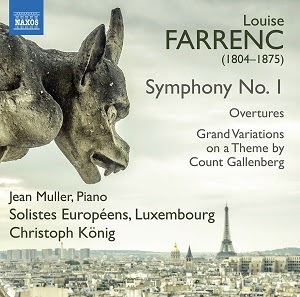 Back in September 2018 I reviewed the debut release by the Solistes Européens, Luxembourg with conductor Christoph König. It was a release of Louise Farrenc's second and third symphonies.

I said, "The Solistes Européens has a fine ensemble blend. König leads them in fiery, committed performances. I would love to hear them perform Farrenc's first symphony."

And now they have. I can't say I love it, but I do like it very much. I think I understand why the ensemble chose to lead with Farrenc's later symphonies. They're stronger works.

Symphony No. 1 in C minor, Op. 32 was completed in 1841, cast in a standard four-movement form. It's a well-written work; Farrenc's themes develop in a cohesive fashion.

The slow movement has an exceptionally beautiful melody. The menuetto is light on its feet, and the finale brings things to a rousing finish. And yet, for me, there was something lacking. This work came out around the same time as Mendelssohn's "Scottish" Symphony, and it suffers a little (I think) by comparison.

To my ears, Beethoven seemed a strong influence in Farrenc's writing, filtered through Mendelssohn.  König and Solistes Européens, Luxembourg once again delivers a fiery, committed performance, but this time the symphony doesn't quite get off the ground.

More successful were the two overtures, written in 1834. This is Farrenc's orchestral writing at it's finest. Both works are full of energy and are models of efficient writing. Farrenc gets to the point with these overtures quickly and never lets the listener go. In my opinion, these should be staples of the orchestral repertoire (and give some of the warhorses a rest).

The Grand Variations on a Theme by Count Gallenberg was also a treat. Louise Farrenc was a virtuoso pianist as well as a composer. Combining her talent for composition and piano performance seems to have brought out her best. The theme isn't that memorable, but Farrenc's treatment of it is impressive. Like Beethoven with Diabelli, she disassembles the melody and uses the parts to build something new and much more interesting.

Pianist Jean Muller seems to be having fun with the material. No matter how complex the music, he keeps things moving with a light touch and wonderfully expressive phrasing. To build off my first review of this series, I'd love to hear Muller perform more of Farrenc's piano music.