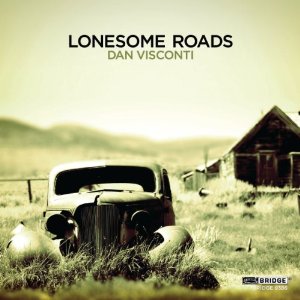 Dan Visconti is a composer who's equally at home with classical and popular music traditions. The works on "Lonesome Roads" benefit from this convergence. Their vernacular gestures and rhythms help audiences immediately connect with them, giving even non-classical listeners readily understood points of reference. And the classical underpinnings to the works give them a satisfying complexity and structural integrity that reveals new details and relationships with every hearing.

This album presents a sampler of Visconti's chamber music. And while there is a certain consistency of aesthetic, the variety between the individual pieces is remarkable. "Remembrances" is a sweetly post-romantic work for cello and piano that's quite beautiful and serene. "Fractured Jams" is a series of abrupt mood changes, beginning with a movement full of sudden outbursts and halting motion, and ending with a rag distorted through a fun house mirror.

Then there's "Hard-Knock Stomp," a bluesy work for solo viola. And "Ramble and Groove" for solo bassoon -- a work that encourages the performer to make rude noises with his instrument (one of my favorite tracks).

"Lonesome Roads" is the centerpiece of this album. It's a fast-paced single movement work for piano trio. String techniques borrowed from bluegrass suggest rural roadways, while the relentless pressing of the rock-inspired rhythms imply that we're driving ever onward over these two-lane county roads hurrying towards an undisclosed destination.

This is an album for explorers. If you're fed up with Top 40 and are exploring the boundries of alternative music, "Lonesome Roads" will take you just a little further. If you're tired of the same old/same old classical repertoire, and are looking for something other than dry academic exercises, "Lonesome Roads" will renew your faith in classical music's contemporary relevance.
on March 05, 2013