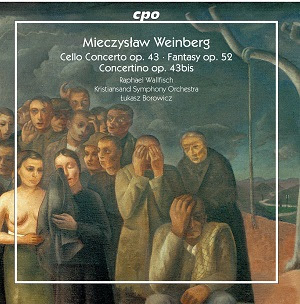 At first blush, it may seem like a recording of Mieczyslaw Weinberg's music doesn't belong in the Cello Concertos by Exiled Jewish Composers series. After all, wasn't Weinberg a Soviet composer?

He was, but he very much belongs in this series. Weinberg was born in Warsaw. His family moved to Russia, and after the Revolution, it was impossible for him to return. He was effectively an exile within the Soviet Union.

And his religion and personality made him somewhat of a political exile, too. Weinberg seemed to alternate between winning Stalin prizes and threatened with arrest.

The works in this release show a slightly different side of Weinberg. His style is often compared to that of his close friend Dimitri Shostakovich. These works, though, have a strong Jewish musical element in them. And that sound is purely Weinberg.

This release features three works. The Cello Concertino Op.43bis served as the basis for the much larger Cello Concerto Op. 43 (both performed here). Also included is the  Fantasia, Op. 52.

The Concerto is double the length of the Concertino -- but it's just padding. The Concertino is a modest, tightly-focused work. Weinberg's music features Jewish melodic elements prominently, IN 1948 such overtly religious overtones were dangerous, and the work remained shelved and unheard for decades.

In expanding the work, Weinberg softened the Jewish elements. But Wallfisch's playing shows they're still there. He bends the tones in the style of a Jewish cantor, making plain the work's foundation.

The Fantasia also uses Jewish melodic patterns, but this time set against harmonies that are both more complex and less tonal than his 1943 concerto.

As always, Wallfisch's sympathetic performances provide insight into the scores. In this case, his decision to highlight the Jewish elements in the music provides added insight into the complex personality of Mieczyslaw Weinberg.