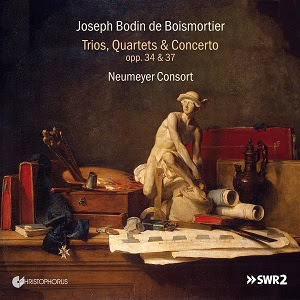 Joseph Bodin de Boismortier was sometimes called the French Telemann -- and with good reason. Like his namesake, Boismortier had a facility for composition, producing a seemingly unending stream of music with ease.

And like Telemann, it wasn't just hackwork. Boismortier knew what the public wanted -- and wrote accordingly. But he did so without sacrificing quality. This release demonstrates that with music from his Op. 34 and Op. 37 collections. Published in the 1730s, these chamber pieces have the tuneful appeal of the Style Galante.

The Neumeyer Consort, directed by Felix Koch presents an attractive program. The Op. 34 quartets were written for a solo instrument with supporting basso continuo. As was the practice of the day, said instrument could be either a violin, transverse flute, or oboe.

The Consort uses varies the lead instrument for the quartets, making for a more interesting program. They do the same with the Op. 37 trios.

These are fine performances. Boismortier knew how to write a melody, and the consort seems to relish every one of them. Their playing has the refined elegance Parisien audiences of the day would have expected. But they also emphasize the dynamics, expressively shaping the music to engage the ear.

They certainly engaged mine. Boismortier's music has an immediate appeal, and the Neumeyer Consort celebrate that with this release. 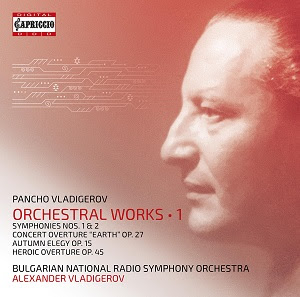 Vladigerov's works tend to superficially follow standard classical forms, but the cadences, rhythms, and harmonies are all formed from Bulgarian folk elements.

Vladigerov is quite simply the father of Bulgarian classical music. His music was well-known throughout Europe before World War II -- admired by both Richard Strauss and Dmitri Shostakovich.

It's since lapsed into obscurity, which makes Capriccio's new reissues so exciting. In the early 1970s the composer, and his son Alexander Vladigerov, undertook a massive recording project to preserve his music.

This release is discs 4 and 5 of what will eventually be an 18-CD reissue of those important recordings.

This set features Vladigerov's Symphonies Nos. 1 and 2 from 1939 and 1949 respectively. This is the composer at his finest (outside of his piano concertos, IMHO). The first symphony is an exceptionally beautiful work, with full-bodied ensemble passages of heroic proportions.

The Bulgarian National Radio Symphony Orchestra is playing the music of their country's greatest composer -- music they know intimately. They're led by the composer's son, an accomplished conductor who also knows Vladigerov's music intimately.

The sound quality is on par with 1970s recordings. The details are a little fuzzy, and there's an overall softness to the sound.

But these performances are definitive. It's clear these musicians are playing with energy, commitment, and even national pride.

This release -- and this series -- is not to be missed.

There are plenty of Renaissance keyboard recordings floating around. So what makes this release special. Three things: the music, the performer, and the instrument. 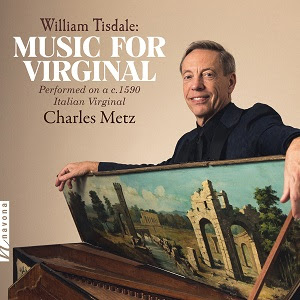 The music is mostly from Tisdales Virginal Book, supplemented with selections from the Fitzwilliam Virginal Book. Very little is known about William Tisdale, save that he was a composer and keyboardist active around 1600.

The Tisdale Virginal Book is a collection thought to be written by Tisdale. It includes 21 pieces by William Byrd, John Dowland, Thomas Morley, and other English composers.

First, the music. The Tisdale Virginal Book and the Fitzwilliam Virginal Book were the few places Tisdale's music was preserved. Tisdale wrote in a richly complex harmonic language that sets his music apart. To hear most of Tisdale's works gathered together show the consistent quality of his style.

Second, the performer. Charles Metz is a masterful musician. He's one of the leading early music keyboardists in the country, and that skill is readily apparent. His playing is both clear and focused. Some virginal music cans descend into a flurry of notes. Not so with Metz. No matter how busy the music became, Metz always managed to keep the melodic lines well delineated.

Third, the instrument. Metz performs on a Francesco Poggi virginal built around 1590. The instrument is completely restored and tuned to A=406 Hz, much lower than our modern A=440. Plus, Metz opted for meantone tuning, instead of modern equal temperament. What does that mean?

The sound is much closer to what Tisdale was used to. The notes have a richness to them, thanks to the lower-pitched instrument. Plus, the harmonies -- and keys -- have slightly different characters to them in meantone tuning. That additional brightness (and sometimes dissonance) was a part of the Renaissance composer's palette -- and one that's lost in modern tuning systems.

Unusual repertoire played by a talented artist on an instrument the music was intended for. Those are the three things that made this release a standout for me. 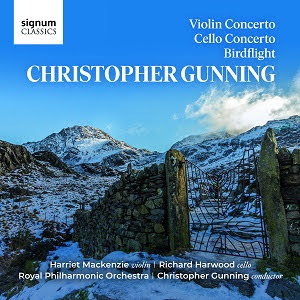 This is the second Christopher Gunning release from Signum Classics. And like the first, it's a collection of beautifully-crafted music with first-rate performances. Gunning composes of both film and the concert hall. The skills needed for the former benefit his work in the latter.

Gunning's Violin Concerto was inspired by a hiking trip in Wales. He paints a vivid picture of the experience. In the first movement, the violin flits about thither and yon over the orchestra's rich harmonies.

It sounded to me like a distant cousin of Ralph Vaughan Williams' "Lark Ascending." But there's more to this work than that. In the other movements, the violin seems to take a different role, conveying the emotions Gunning experienced during the hike.

Violinist Harriet Mackenzie plays with sensitivity and expressiveness. This concerto is more about musicality than technical show. Mackenzie's performance does just that.

The Cello Concerto is a more somber and introspective work. One that's ideally suited to the instrument. Richard Harwood plumbs the dark emotions of this work. His playing sometimes takes on a plaintive quality that tugs at the listener's heart.

The composer leads the Royal Philharmonic Orchestra in these performances. To me, it seemed as if Gunning was talking directly to me through the soloists and the ensemble. And I liked what he was saying.

The Classics a Day team has celebrated Black composers before. This time around, I tried to avoid duplication with previous posts. It was easy to do. There is a lot of classical music by persons of color, both in the past as well as the present. A lot. 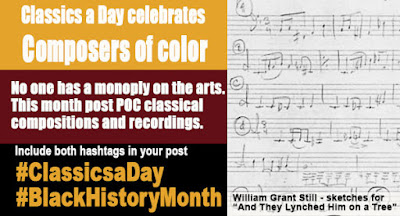 Here are my posts for the fourth week of #BlackHistoryMonth for #ClassicsaDay.

White was one of the best violinists at the turn of the 20th Century. His race limited his opportunities. His music blended African-American traditions with Western classical forms.

This work is credited with jumpstarting Abels' film career. Jordon Peele saw it, and tapped Abels for the score of "Get Out." He followed this with the soundtrack for "Us."

In 1954 Kay was asked to provide music for a CBS radio program "String Serenade." He wrote two dances. They were hit, and so he wrote two more for the program. Later he added two more to round out the suite for concert use.

This is an aria from Perry's opera "Tawawa House." It was an underground railroad station and later the site of Wilberforce College, one of the first black-owned colleges.

Singleton wrote this work while serving as the composer in residence for the Atlanta Symphony Orchestra. The ensemble premiered the work in 1987.