Jan Ladislav Dussek was a brilliant pianist, and an accomplished composer. Like is contemporaries Mozart and Haydn, he strove for a clean structure in his music, even as his piano technique became more complex and expressive.

This re-release from Capriccio features two of Dussek's piano concerti, plus an additional oddity for piano and narrator (!). Pianist Andreas Staier is backed by the Concerto Koln. Staier performing on a fortepiano of the period. It's a good call -- on the fortepiano, you can hear the instrument being pushed to its limits. On a modern piano, with its wider range and more durable action, the solo passages would come off sounding a bit more sedate, I think.

The disc opens with Dussek's Concerto in G minor, Op. 49 from 1801. While the structure owes much to Haydn, the harmonies and solo passages look ahead to the piano works of Schubert.The orchestration is fairly perfunctory, but that's a common trait for works of this period. The ensemble was there to back up the soloist, not share the glory!

Although seemingly simple in construction, the melodies often take some unexpected twists and turns, especially in the slow movement. This concerto doesn't have the thundering pronouncements of Beethoven, but it is music by a master of the instrument speaking in a more refined, but nonetheless emotionally expressive voice.

The second work on the disc, the Piano Concerto Op. 22 sounds Mozartian -- and no wonder. Dussek wrote the work in 1793, when Mozart's concertos were well-known (and before Beethoven really got going). Once again, the structure of the piece is clean, while the piano falls all over itself in tumbling scales and arpeggios. But there's a purpose to it all. Dussek crafts some engaging music while he's dazzling us with his technique.

I have to admit I found the last work on the albut a little off-putting. The Tableau “Marie Antoinette” is a recitation (in French) of Antoinette’s demise with the scenes illustrated musically on the piano. Perhaps it works in live performance, but personally, I would have rather have just had the music and the text printed in the booklet.

Andreas Staier does a fine job. His technique is such that he pulls much more expression out of the fortepiano than many musicians can from a modern piano.

Tuneful and appealing -- recommended for the concertos.
on May 27, 2011 No comments: Links to this post

In Part 9, I described the buildings I picked up that seemed to be a good match for the Straco layout. But of course, one can't just slap structures down on a layout without some type of landscaping!

Although the scale of these Japanese trains is HO, this is by no means an HO-scale layout. The spirit of this project is more in line with that of tinplate train layouts -- that is, these are toys rather than scale models, and so the setting should be more toy-like than realistic.

In this case, it meant all I had to do was just lay down a road for the houses to be grouped around, and I was done. Using painter's tape, I played around with some different configurations before choosing the one in the photos. One nice thing about using a pegboard -- it was easy to keep things lined up. I just used the holes as guides for the tape.

My initial idea was to paint the road underneath the places where it crosses the tracks. Building a graded crossing was out of the question. The rails are unusually high because the gear mechanism of the engine hangs pretty low (as I discovered early on in the process). I couldn't fill in the space between the rails to make a crossing. My second thought was to then just continue the road underneath the tracks.

But to do that, I would have had to take up the entire loop, and quite frankly, that seemed to be a bit much. So I just painted as close to the ties as possible, and I'm happy with the result.

For paint, I chose a basic enamel gray from Testor's. I used a small sponge brush to apply it, let it dry, and that was that. I let the paint dry overnight, removed the tape, and ran some trains.

Sometimes the simplest pleasures are the most enjoyable.

Total cost for the project:

I've already shared some observations of the big toy train meet in York, PA. But I haven't talked much about what I bought. In a box of junk parts, I found some curious structures. The price was right, so I made the purchase. Dad could use most of the odds and ends in the box, and I got six small houses.

As I say, I know virtually nothing about them, save that they're probably Japanese. How can I tell?

Well, the age seems right. These seem to be easily forty-plus years old. And in the 1960's inexpensive everything came from Japan (just like it comes from China today). The houses all have a very curious construction. Each corner is slotted so that the pieces slip together. They're also glued, of course. 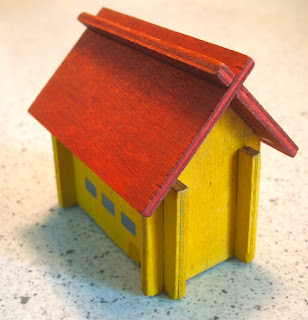 My suspicious is that the wood was stamped with a cutter. The windows are all slightly indented, which also suggest stamping.

The roofs are two different colors (I have two with blue roofs and four with red roofs) but otherwise all six houses are identical. There are no markings anywhere on them.

But Dad thought they'd look good on the Straco layout, so I picked them up. They do seem to fit in. The scale (and I use that term loosely) is about right, and I like the idea of filling out the layout with other Japanese accessories.

If anyone has any information about these houses (or perhaps can forward this post to someone who does), I would really like to find out more about them!
The next step: paving the pegboard Paradise.