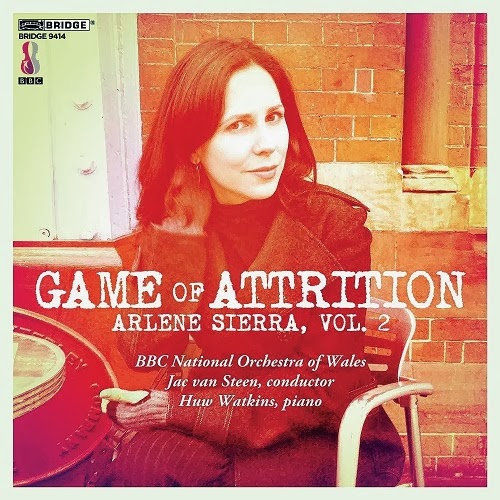 This release features four orchestral works by Arlene Sierra. Listening to the entire album, one gets an overall sense of Sierra's style. A small, simple musical idea -- a repeated note motif, a grouping of instruments -- is set in conflict against a similar version of itself. And that back and forth conflict forms the building blocks from which larger and more elaborate structures form.

"Moler" is a jittery, sort orchestral work. The title refers to grinding teeth, and although the music won't set your teeth on edge, it does have that relentless, restless motion and undercurrent of anxiety that teeth-grinding suggests.


PDQ Bach wrote a concerto for piano vs. orchestra - and that seems to be the relationship of forces in Sierra's piano concerto, "The Art of War." As the work's subtitle suggests her point of inspiration is Sun Tzu's classic military treatis.

In the first movement, the piano attacks the orchestra and become overwhelmed by its superior numbers. The repeated note motifs Sierra uses suggest a stabbing motion. One can almost hear the conflict move back and forth through the orchestra.

The second movement casts the piano as an insurgent, darting in and out of view, making quick jabs before retreating. It's an exciting work that requires great virtuosity from both soloist and ensemble.Pianist Huw Watkins and the BBC national Orchestra of Wales directed by Jac van Steen are more than equal to the task.

According to Sierra, the extra-musical genesis of her work "The Game of Attrition" is different species competing for limited natural resources -- in this case represented by different instrumental groups playing in the same registers. As with the piano concerto, there's a sense of conflict in the work, but it makes for compelling listening, even without knowing the background. There are no hackneyed orchestrations here. Every moment the listener is presented with fresh instrumental combinations.

The motifs in "Aquilo" seem to form a chain, with one leading into the other in an interlocking fashion. This work seems less about conflict (though it's still there) and more about an imbalance that continually tips the music forward as it rushes to its conclusion.

"Game of Attrition" is an album of urgent, high-energy music. But for me it was a rewarding listen -- and a refreshing one.
on April 02, 2014