Once again my dad roped me into giving a presentation for the Capital Miniature Auto Collectors Club (you can read about my other adventures with the CMACC here). At their monthly meetings, the rotating host is expected to come up with a theme. Members who have things that tie in with the theme bring them and present them, providing background information about the items.
This July the subject was building sets and roadways. The group is focused around the appreciation and collection of toy cars and car models, so the idea was to present building sets and roadways that were (or could have been) used with toy cars.

One member brought in a building set that was absolutely fascinating. It has no manufacturer listed, no trade mark, no clue as to who made it. Or indeed, why. The set is a paper village that mailed in a flat over-sized envelope. Inside was a base, and several buildings that unfolded into shape. 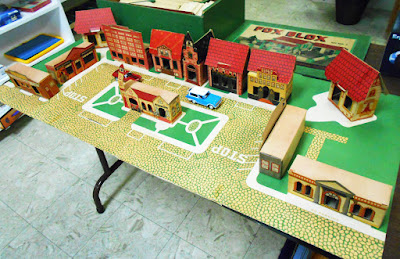 Even with no hard information, it's possible to make some educated guesses about this piece.

First, the style of the artwork and the color palette suggest this was made in the 1920s, or possibly the very early 1930s. 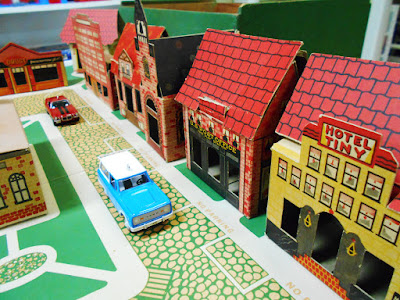 Personally, I lean towards the 1920s. I think a 1930s set would have more streamlined and Art Deco-style buildings. 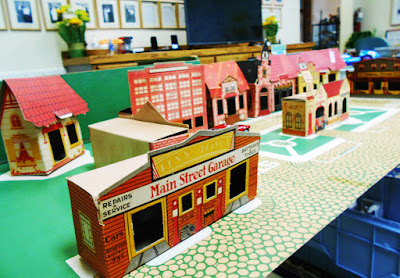 Also, the lettering -- particularly on the garage (above) seems more 1920s. Even in the early 1930s, san serif was preferred as it looked newer and more streamlined. 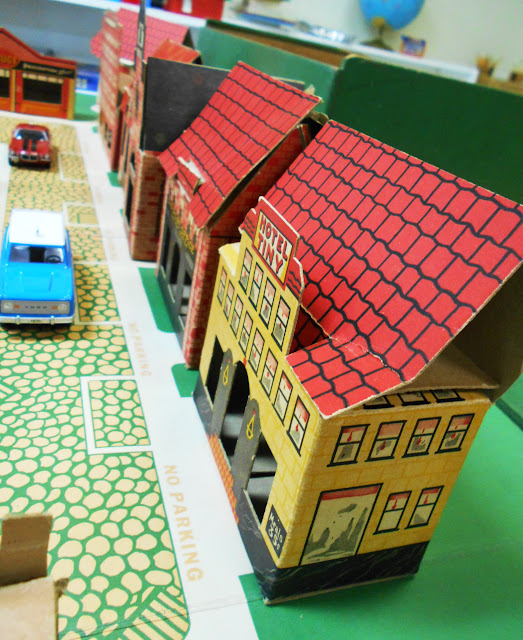 I think that it might possibly be a premium of some kind. Since it was shipped in a envelope, and designed to be shipped in an envelope, I think it unlikely that this village was sold in retail stores. Either it was something you had to purchase through the mail, or perhaps send for with your collection of labels or box tops.

While we don't know a lot about it, this paper village made an interesting display. And I could imagine some youngster almost 80 years ago on the floor pushing his Tootsietoy Grahams through the streets of this brightly-colored town.