Read all the installments of the Straco Express layout project here.

This limousine is unusual in more ways than one. First, it didn't cost me a cent. A member of the CCC -- who also reads this blog -- thought I might be interested in it for the Straco display layout, and gave it to me as a gift. And I'm very grateful.

Second, I thought it was very similar to a car I already had. The lines looked about the same -- but I was wrong. However examining these pieces and trying to tease information out of them is part of the fun (at least for me).

Third, it looks great on the display. The limousine's the right size, and it has different lines than most of the other cars -- and I'm always looking for contrast.

When I first got the car, I thought it might possibly be an older version of a small sedan I already owned.

There were too many differences for me to think they might have been made by the same company. The chassis are attached to the body through different tab configurations -- and the chassis themselves are too different. While a company may simplify manufacturing over time, usually there's a resemblance between the old and the new versions. 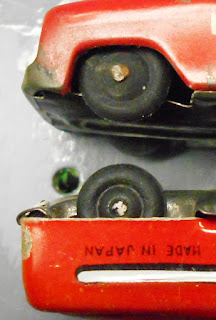 The wheels on both cars were rubber, but they weren't the same.

I had originally placed the newer sedan as a product of the early to mid-1960s. I've noticed that as Japanese toy manufacturers improved their lithography skills over time. The lines became thinner, the colors crisper, and there seemed to be fewer registration issues.

The limousine, on the other hand, has very simple lithography with very thick lines. I'm not sure how early in the postwar era Japanese toy companies started adding drivers and passengers (all with vaguely American features) to the lithographed decoration of these cars.

The limousine has black windows -- definitely easier to draw than gaijin. I don't think it's from the late 1940s, though. The body style seems more mid 1950s. And note the (relatively) elaborate stamping of the body.

The limousine has an embossed hood ornament and grille. The newer sedan just represents these features in the lithography.

I don't know who made this vehicle -- but I'd sure like to find out. This is the first vehicle I've seen of this type -- anywhere. There aren't any markings on it, save "Made in Japan." Nevertheless, it's a great addition to the Straco Display Layout, as you can see. 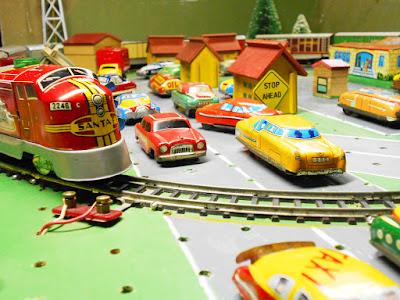 Total cost for the project: