Hat Trick strong debut with Garden of Joys and Sorrows 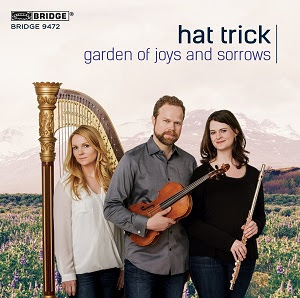 According to Hat Trick's website, they aim to "broaden the flute, viola, harp repertoire and showcase its individual and collective strengths." Based on their new release, I'd say mission accomplished.

April Clayton (flute), David Wallace (viola), and Kristi Shade (harp) are all master musicians who collectively create something wonderful. Their ensemble blend is superb and well-adapted to whatever they're playing.

This release includes the basics of the repertoire (limited as it is). Debussy's Sonata for Flute, Viola, and Harp is played with a lightness that only enhances the impressionistic nature of the music. Also included is Théodor Dubois' Terzettino, which predates Debussy's work by a decade. Hat Trick delivers a charming performance.

The repertoire broadens significantly with the other works on the album. Toru Takemitsu's 1992 "And then I knew 'twas Wind." Takemitsu's work is a delicate study in timbral possibilities.

Hat Trick commissioned "Submerged" from Miguel del Aguila. It begins with a lively evocation of South America before slipping into a mysterious middle section where time seems suspended (that's the submerged part). It's a strong opening to the program -- and the ending is equally so.

"Garten von Freuden and Traurigkeiten" by Sofia Gubaidulina, like the other contemporary works on this release, were inspired by poetry. The extended techniques Gubaidulina demands create an exotic -- yet perfectly logical -- soundscape that interprets Francisco Tanzer's poem of ambivalence. Honoring the composer's suggestion, the performance ends with a reading of the poem.

An impressive release by an impressive trio of musicians. I look forward to Hat Trick's next album.